I’m playing in the WPT Borgata Open. A player I’ve always considered tight opens from UTG+1 to 2.5X the big blind. In the time he and I have played, I have never once seen him bluff. I have instead seen him pot control constantly. It seems like the worst thing that could ever happen to him is that a hand gets out of control.

A middle position player calls. The cutoff calls. I look down at As-9d. I call from the big blind. The board comes Qc-5h-7h. I check, for obvious reasons. It gets checked around. The turn is an offsuit ace.

Sometimes, I would lead here. Especially if I consider the initial opener to be looser, and unable to fold a 7-6 or 9-9 that he checked multiway.

I don’t want to lead and have the nittier early position raiser call me. If that happens, I will be forced to check most rivers. When I do that, I will have capped my range. Most players will intuitively understand that I would lead the river with most two pair or better combinations, so they will know I have a missed draw or one pair. This is bad for me, considering that’s exactly what I have.

Here’s what you’ll find below:

Today, I’m not playing that guy.

Live poker is a different game too. When that ace rolled off on the turn, I stole a sideways glance at the initial raiser. He looked quite interested now that that card rolled off.

I check. The early position raiser bets now. Middle position and cutoff fold. It’s on me. I call.

The river is an offsuit deuce. I check to the early position raiser, the nittier pot controller.

There’s around 20,000 tournament chips in the pot. He looks at them. He goes to his chips. He thumbs his stack for a second, rifling up and down. He grabs ten thousand in 5k chips. He puts them on the felt next to his stack. Then, he thinks for a second more. He has a look like, “Oh oops, I forgot something.” He decides to rifle his 1k chips again. Thumbing them, he decides to grab four more of them. He puts his whole bet together now. 14,000 in all. He slides it into the middle. It has taken him no less than 15 seconds to put together his river bet. Almost immediately I throw my hand into the muck.

Tell me, how did that last sentence make you feel? It shouldn’t make you feel close to anything, because this is a clear fold.

The most important question to ask yourself is…

“Does he do this with X?” and X is the best hand that you beat. If he doesn’t bet X, then it stands to reason you don’t beat anything!

In this case, X would be A-8s. That seems like quite the stretch. Does this nittier player even open A-8s from early position? We don’t know. Does a pot controlling style player value bet top pair with the fifth kicker twice in a multiway pot? That sounds like even more of a stretch.

But okay, let’s say he’s opening 15% of hands, which would be about the minimum we’d need to give him to include suited aces. Well, now, if we include A-10o+ (which would be in that range) we need to count all those combos.

The way this works isn’t “well he could have A-10o, but we beat A-8s” That makes it sound like it’s one hand versus one hand. That’s not how poker ranging works.

The next part of this puzzle

You then ask how likely it is for each combination to be in his range. We’re losing on the scoreboard 26 to 4, and I don’t even know if we can count those four. This is looking pretty bad.

So, if we can’t beat any hand that he’s value betting really, we need to ask ourselves: Is he bluffing there ever?

Poker players always want to see bluffs that aren’t there because folding means consenting to a loss. No one wants to let another man beat them. This is referred to as loss aversion. If you want to be a professional gambler, there should be no more fascinating topic for you. But that is a topic for another day.

When people are bluffing on the river, they tend to grab the chips and put them in. It’s like jumping off a cliff into a river. They get their nerve up and do it. They don’t hem and haw. Tell a Friend

What bluffs could this person have? He’s a pot controller and tighter, so he’s not leading into three players on that turn with nothing. So, he needs to be betting at least a draw. Due to how tightly we have him opening preflop, the only draws he can have are flush draws. By the way, if you’re combo counting, each flush draw combination you can think of, such as J-Ts of hearts, is exactly one whole combo.

We can’t count those hands either because we’ve never seen this guy bluff before. Also, there’s a strong possibility that he would have bet those flush draws on the flop. We’re stuck again.

Finally, his behavior on the river is extremely alarming. When people are bluffing on the river, they tend to grab the chips and put them in. It’s like jumping off a cliff into a river. They get their nerve up and do it. They don’t hem and haw.

When a guy does take his time there and plays with his chips for so long, that doesn’t scream bluff or thin value bet. There’d be some tension in those bets. Bluffers tend to not want to do anything that could look suspicious. So rifling your chips for 20 seconds and annoying everyone at the table doesn’t exactly fit that MO. More likely, this is an awful attempt to feign weakness when hand values are set and the man knows he has the joint.

For these reasons, I thought it was a clear fold, and I didn’t really think of it much afterward.

Then, it occurred to me: This hand holds a secret.

So, I started making this hand a quiz for poker players. I changed the kicker in my hand to a 3 make it even easier. I slipped in clues. I tried to help students along.

None of them could find the fold on the river. No matter how many times I said, “we’ve NEVER seen this guy bluff, he is a SERIOUS pot controller” they would still go on calling on the river. When I asked them why they did that, they couldn’t articulate why they slid their money into the middle.

What I have come to learn about people and poker players, in general, is that while people say they’re using logic to make decisions what they’re actually doing is letting their emotions tilt them one way or another.

There was a case where a man had his emotional center in the brain destroyed, and he wasn’t a cold calculating cardsharp by the end of it. Instead, he wouldn’t show up for his kid’s baseball games (because he felt nothing for his child) and it would take him three hours to decide on breakfast cereal in the morning. We need the push and pull of our emotions throughout most of the day. They only become a burden to us when we play cards, and our loss aversion is gutting us of valuable chips.

This river call was 14 big blinds. Most great tournament players make 10 big blinds per 100 hands. It takes three hours to play 100 hands live. 14 big blinds it’s like throwing away four hours of work. For the hell of it.

The truth is, most people call on the river because “I have top pair with a good kicker, and I’m only calling two bets.” I used to say that to myself as well.

This is poker entitlement, pure and simple.

I used to say that to myself because I was entitled. I didn’t want to see reality on reality’s terms. I wanted my hand to be good, so I made it a good hand in my mind by sticking to generalizations as opposed to combination counting.

The only way to get rid of poker entitlement and to not allow yourself to be gamed is to work harder than the other guy. You need to fight fire with fire and replace emotion with emotion. If you counted the combinations appropriately in this hand, you would be disgusted with yourself if you called the river. That’s a powerful motivator. That’s what we need. We need to work up to that.

When I played this hand, I thought through it in the way you’re reading today. I wasn’t born being able to combination count, however. I was able to work through this hand subconsciously while I consciously looked for the player’s physical tells because I’ve been practicing for over a decade. Whenever I get home from a tournament, I pick a hand and work through it. I think about the combinations. I do the math. I quiz myself. I started coaching because it allowed me to monetize my study time. It also gave me a platform to share my conclusions, so I could receive helpful criticism on my thought processes.

I believe anyone can play No-Limit Hold’em profitably because in my high school I got smoked by everyone when I played cards. I was a terribly mediocre pro when I came on the scene. I was a D math student in school. The junior college I applied to told me I had to go back to ninth grade math. Combination counting is not that hard to understand it just takes good old-fashioned work to get to. That’s how you avoid poker entitlement. That’s how you see reality for what it actually is. 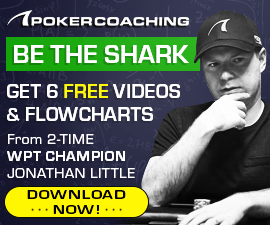 In addition to battling on the felt for over 13 years, having final tabled multiple prestigious events such as EPTs, WCOOPs, and FTOPs, Alexander "Assassinato" Fitzgerald has found massive success in teaching the game of poker to thousands of students. The American pro has become a prolific poker content producer, writing two best-selling books and sharing his views on effective exploitative plays and math-based techniques in numerous articles, videos, and webinars you can find on PokerCoaching.com

The reason I love writing about poker is it’s very much writing about life. If you don’t have your life in order, you will not play winning poker. Unless your training is simply impeccable, you will fly off the handle at some point. It takes years and years of deliberate study to get your game …

Become the Best Poker Player at Your Table

If you’re looking to transform your game so you can be the best poker player you can be, you first need to start by transforming your life. Change the way you think and live and you can change your game. How? Start by using these tips and techniques. This is what you’ll learn: How to …

Become the Best Poker Player at Your Table Read More »